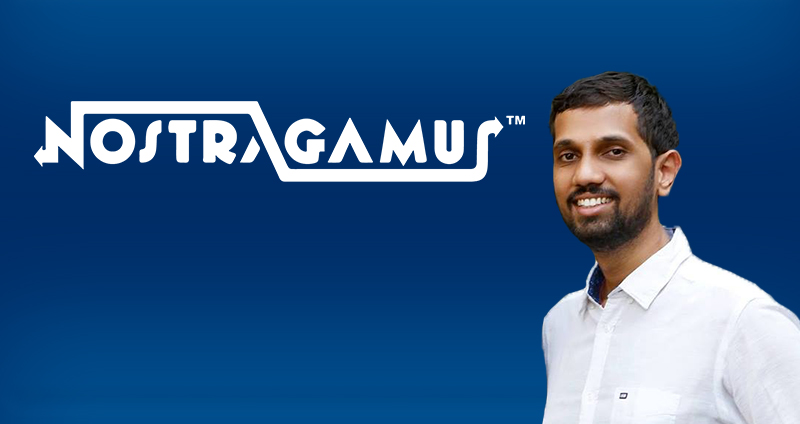 Around two years ago, IIT Madras and IIM Calcutta graduate Yashashvi Takallapalli along with his three other friends decided to start Nostragamus, a new and untested version of fantasy sports, that was different from draft-based fantasy.

In less than three years, Takallapalli and his team have turned Nostragamus into the biggest prediction gaming app in the country, with over 5 million registered users and a loyal user base.

In this exclusive interview, Takallapalli shares details about Nostragamus and its plans as well as the scope for growth in the competitive fantasy sports industry in India.

Q. You initially started an online sports news portal Sportscafe and later launched a unique fantasy game, Nostragamus. Can you tell us, why you decided to start such as game and also tell us more about Nostragamus and how it is different from other fantasy game formats?

Yashashvi Takallapalli (YT): Gambit Sports (the parent company of Nostragamus) has been the culmination of our love for Sports and our flair for providing something different and spectacular to the Indian Sports audience.

I started Sportscafe with a duty to provide engaging content, all centered around Indian Sports.  The idea for Nostragamus, on the other hand, was born when we decided to offer not just content but an experience to the Indian Sports Fan – a comprehensive Sports experience complete with content, knowledge, thrill, money, adventure and journey/progress, all in the form of a game.

Nostragamus is unique because it fundamentally plays to the sensibilities of the Indian sports audience. One thing that is common to all levels of sports followers, right from the casual watcher to the hardcore fan, is that they have their opinions on sport. We are tapping into those opinions with a simplified format. Keep in mind, that opinions are just not about which players will perform better, but also about who wins, who progresses to the next round, who makes a century, which Dhoni will turn up – the one that finishes matches with helicopter shots, or the one that taps away for singles. That’s the fun of the game.

Q. Could you share more details on the game’s features and offerings? Also, can you tell us about the response you have received so far and some metrics such as registered users, revenues and active users?

YT: Like I said before, Nostragamus offers both sports predictions and draft (the traditional fantasy sport model) in multiple languages. Even in Sports Predictions, the users have historical statistics to make informed decisions, there are options which eliminate randomness, thereby making it all exciting.

The response, to summarize has been phenomenal. We started off being a nobody, and now we are here, we have an overall user base of over 5 million and are now amongst the fastest growing apps offering fantasy products, adding around 1 million users every month.

Our active user base is also well above industry metrics, we have a very sticky, loyal base.

YT: Completely. Firstly, the format, which we call as predictions base fantasy, has been analysed by leading law firms in India who have studied the ruling, our game format, and concluded that we are also a game of skill given the points mentioned in the judgement. We have gone a step further: American courts had outlined clear, mathematical rules that qualify a game as a game of skill. We had our game evaluated by statisticians, who then concurred that our user statistical data abide by those rules as well.

Also, we are now offering the conventional draft fantasy format on NostraGamus too!

Q. The fantasy sports space is extremely competitive with lot of operators vying for space and market share. How does Nostragamus plan to engage with users and gain traction with others in this competitive sector?

YT: I think it is a space with so much potential for growth. Today, they are 60 million fantasy sports users, we expect that to rise to 200 million+ in the next five years. But that growth will be stunted if fantasy sports games do not retain users well. Our objective is to deliver a game that is exciting for all kinds of sports fans. And trust me, there are many different types. We constantly ask ourselves 2 questions:

2) can we entice the avg cricket player to enjoy football, or vice versa

The company that answers these 2 questions will be the premier fantasy sports company worldwide.

Q. Finally, can you share some plans on your strategy for the future and how you plan to sustain in the coming days?

YT: We are expanding rapidly, not just with users but also with our employees and think tank. Our team has a bunch of talented, driven folks who make possibilities reality.

My vision is to introduce real-money fantasy gaming as a sustained gaming option to every type of sports fan in the country.

While I can’t reveal the exact contours of the strategy, I can say that understanding the addressable market and their needs, providing for them through a bouquet of in-game offerings is the key to making this a reality. We are, at heart, a tech & product gaming company, and we will make it impossible for a player to stop playing the game.