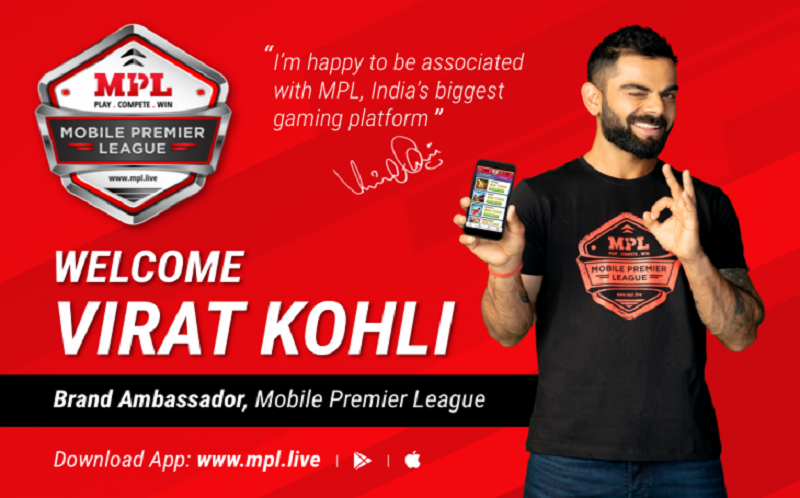 Mobile Premier League (MPL) has renewed its association with its brand ambassador and Captain of the Indian Cricket team Virat Kohli for another year, as reported by Exchange4Media.

Virat was first signed on as MPL brand ambassador for a year in March 2019, when the company launched various video campaigns with the cricketer to gain momentum for the platform before Indian Premier League. In April 2019, a TVC campaign #GameKheloHeroBano featuring Virat was launched. MPL had about 25 million registered users in April 2019, and at present it has about 32 million registered users and over 5 billion gameplays.

Recently, MPL launched a 75-second video campaign that was shot in Mumbai, where Virat met and spoke with the top 10 winners of the ‘Meet Virat’ contest on the platform. That video went viral on social media. MPL offers fantasy, prediction and virtual games of skill and cricket.

In reference to the renewal of Virat’s association with the brand, he said,  “I am happy to announce that I have renewed my association with Mobile Premier League (MPL). In just over a year, I have seen this young Indian startup grow and reach fans across India. I look forward to supporting them in achieving their goal of being the number one gaming company in India.”

Jogesh Lulla, COO, Cornerstone Sports, which manages Kohli said, “MPL is a young company with exceptional leadership and is on track to become the largest e-sports platform. Our partnership thus far has been fantastic and we look forward to helping them grow from strength to strength along with Virat.”

“We are honoured and privileged to have Virat continue his association with the MPL family. With his love and support, we have started to march towards our goal of democratising esports and skill monetisation across India. Virat, his persona, and his positivity resonates across our youth, and along with him, we are looking forward to doing our bit to empower the immensely large talent pool in our country,” said Sai Srinivas, Co-Founder and CEO, MPL.