Working President of the ruling Telangana Rashtriya Samiti (TRS) KT Rama Rao answered a Twitter users question on whether he feels the game of poker involves skill or not.

While fielding questions from citizens on Twitter, a user named Arvind asked the senior Telangana politician and son of current Chief Minister K Chandrasekhar Rao to address complicated issues too and give clarity on whether poker is a game of skill or not, although the game is not expressly banned.

Replying to the query, Rao tersely stated ‘Not a big fan of poker sir.’

In a similar interactive session in July 2017, replying to a user on the Telangana government’s decision to ban online skill games which is played by an individual out of his/her free choice, Rao had justified the move to ban all gaming for stakes stating that ‘There’s a huge difference between gambling & gambling. Online/offline gambling involves crores of rupees is against the law in Telangana.’ 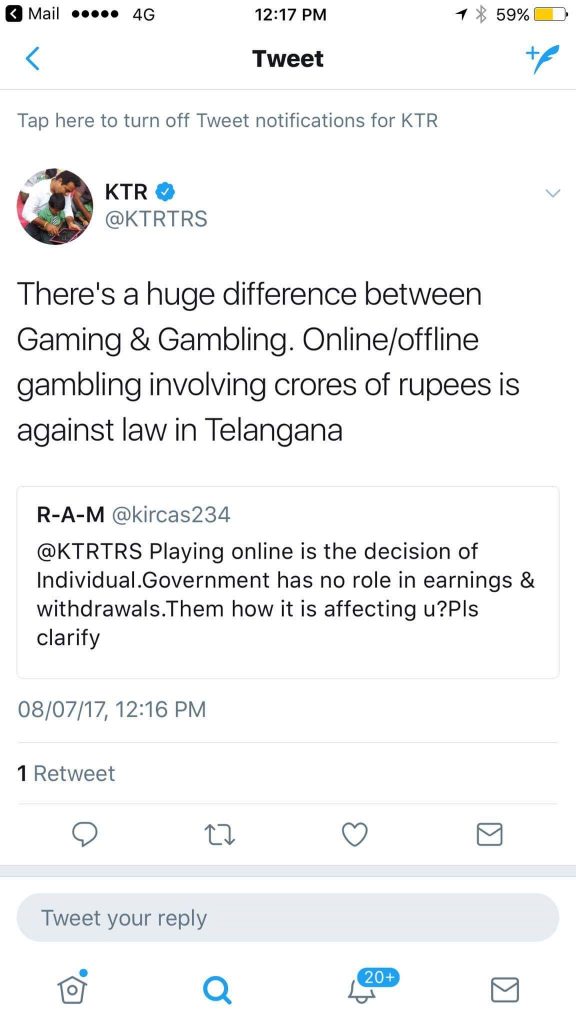 It may be noted that the Telangana government under the leadership of KTR’s father had taken the unprecedented step of banning all online skill games involving stakes (and deleting an exemption stating that games of skill do not fall under the ambit of gambling) through an ordinance in June 2017 and later through an amendment to the ordinance.

In November 2017, the Telangana legislature passed the Telangana Gaming (Amendment) Bill replacing the ordinance with a Bill that was approved by the governor.  The assembly had also amended the Prevention of Dangerous Activities Act to include gaming activities under the draconian law, which enables the government to taken into preventive custody those committing gaming-related offences.

Online rummy companies have challenged the decision of the Telangana government to ban online skill games in the High Court. However, their plea is pending in the court since the June 2017 and has not reached the final hearing stage due to frequent changes in the composition of the bench.

Read more posts about offline and online poker in India.