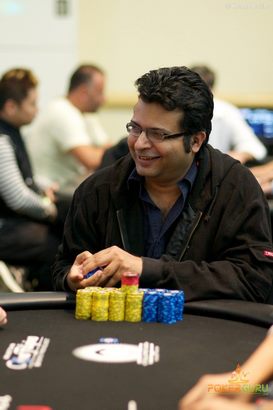 Amit Varma, a libertarian journalist, columnist and novelist has written extensively on the need to legalise gambling, the thrill of poker and  free market issues. Varma has won the Bastiat Prize for Journalism twice (in 2007 and 2015) and has written extensively for publications such as Cricinfo, Wall Street Journal, Guardian and Economic Times. Varma has also made it to Business week magazine’s list of India’s 50 most powerful in 2009.  In this interview, he tells us why he got in love with poker and eventually quit, his idea of allowing gambling without any strings attached and a likely scenario when gambling would be legalised in India.

Q. You had been an active poker player for the past few years, but recently you wrote that you would be quitting poker for good. Can you tell us what enthralled you towards the game of poker and what made you quit?

Amit Varma (AV): I fell in love with poker because of the deceptive complexities of the game. There’s an old cliché about how it’s the easiest game to learn and the hardest to master, and that’s absolutely true. I loved the math involved, the psychology, and the fact that it was not just a test of your intellect but also a test of your character. Before I came to poker I’d been interested in subjects like cognitive neuroscience, behavioural economics and probability theory, and playing poker helped give me a deeper understanding of many of the fundas I had only read about until then. I explored many of those areas in the poker column I wrote for the Economic Times, Range Rover.

I quit partly because I felt the itch to go back to writing, and partly because while I loved the game of poker in the abstract, I was getting increasingly dissatisfied by the demands the game made on my lifestyle in the concrete. I explained my reasons for it in the last installment of Range Rover titled ‘Why I Loved and Left Poker.’

Q. Globally, there is a raging debate on the level of skill involved in the game of poker and whether it should be construed as gambling. Some even equate it to sports like chess and say that lot of maths, economics, game theory and psychology is involved in the game. In India as well, this discussion has been going and there are some legal battles fought by individuals and online companies. What is your take on this debate? Do you think poker should be construed as a game of skill and therefore there should be absolutely no regulation, or do you think it should be regulated but treated as gambling?

AV: Poker is evidently a game of skill. It’s ridiculous to even dispute this. But there is a reason why the layperson who does not know the game has a hard time understanding this. See, all games involve a certain quantum of luck. Why is the Wimbledon final not a single game or a single set? Because that is not enough to determine the best player on the day, and five sets is considered a fair amount of the play for the luck to even out and the best player on the day to emerge. Well, in poker, the quantum of luck for any single event is so high that in a Wimbledon final for poker, you’d need 500 sets. In other words, the long run is much longer in poker than in other sports. The best guy still wins in the long run, so it is definitely a game of skill, but in the short run anything can happen.

Humans tend to be result-oriented, though, and this long-run nature of the game is something even many poker players I know don’t fully grasp. So it’s even harder for a layman to understand. If there was a court case on whether tennis is a game of skill, I could get Roger Federer to play the judge in a tennis match, and the answer would be obvious. But in a similar case for poker, if Phil Galfond played a hand – or even a short session – of poker with the judge, the judge would win almost half the time! (Galfond would bankrupt the judge in the long run, but good luck getting a judge to play half a million hands with Galfond!) So, if we are to make the case about poker being a game of skill, we need to show statistics of long-term results to judges, explain the nuances of the game and hope they get it. As it happens, this is a winning battle, and we have managed to win this fight in places like Bangalore, thanks to the good Suresh!

To answer the last part of your question, I think there should be no regulation on either games of skill or on gambling. So the question is moot. Even if poker was not a game of skill, it should not be regulated.

Q. As a libertarian you would obviously believe that there should be minimum or no interference by the state. What do you make of the paternalism of the government specifically in the context of prohibiting gambling and viewing it as some sort of moral wrong?

AV: I have made the case over the years that the government should stop punishing ‘victimless crimes’, and gambling is one of those. (See my pieces, ‘Don’t Punish Victimless Crimes’ and ‘Laws Against Victimless Crimes Should Be Scrapped.’)

Also, as I wrote in another old piece called ‘We Are All Gamblers’, everything we do in our lives is actually gambling. We weigh up the odds and make a bet. A skilled poker player is actually making far better decisions on the table than many people do in their lives.

Q. There are obviously various arguments in favour of legalising gambling and betting in the country, including the tremendous revenue potential for the government. However, keeping in mind the socio-political realities, do you reckon that any major government, central or state will take the decision of decriminalising or legalising gambling or betting anytime in the near future?

AV: It depends on the incentives, and following on from there, on the vested interests involved. If an Ambani or an Adani decides to open a chain of casinos because it is so lucrative, then the chances of it happening go up hugely. The right decisions sometimes happen for the wrong reasons! So it’s possible, but it won’t happen because the government suddenly sees the rationale in our arguments, oh no. It will happen when some politician or businessman or group of rent-seekers see money in it for themselves.

AV: I think the government should just legalise these and let private players do what they will. It is not the government’s job to run lottery schemes.

Q. Finally, if the government decides to legalise gambling, what should be the contours of the policy? Any suggestions on the framework or model of any jurisdiction that ought to be followed?

AV: I would have no contours on any such policy. Just legalise, no strings attached. Every single regulation, by raising costs for the operator, would in effect redistribute wealth from punters to the government or to specific rent-seekers within it. Let the rule of law apply if any customer is cheated, and tort litigation is always an option for an aggrieved customer, but there should be no regulation beyond this.