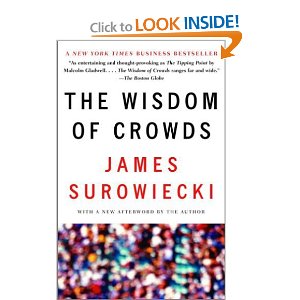 In previous posts (“Will India legalise gambling?” and “The time is ripe for gambling law reforms”), I have given various arguments in favour of legalising and regulating various forms of gambling instead of allowing an underground market for such activities to thrive.

Many experts are of the opinion that betting on any event is merely a game of chance where those wagering in favour of a particular event happening lose all the money wagered by them if the event does not happen as predicted by them. However, what is failed to be understood is that data from wagers on various events can actually be used to correctly predict future real-life events of considerable importance. This has aptly been demonstrated in journalist James Surowieckis award-winning book The Wisdom of Crowds.

Surowiecki is of the opinion that the aggregated data of a sizeable mass of people correctly predicts events. He says that the average or mean of a large number of people predicting a particular event will be better than a few experts giving their opinion. He has shown various the results of various interesting experiments and data in support of this argument. One such example is the experiment undertaken by British scientist Francis Gulton who collected data of predictions made by various people (which included various expert, non-experts and as to the weight of an ox present in a fair. The average of every one’s prediction was nearly same as the oxs weight. This and Surowieckis other enlightening examples (like finding out through a group of people, the location of a submerged ship) clearly illustrate the fact that the trend given by people in predicting an event is to an extent accurate and may be trusted- the prediction turns out better if there is something at stake, i.e. if people get an incentive to make the right prediction.

However, Surowiecki says that for this theory to work best, the composition of the crowds must have the following features:

1. Diversity in opinion, i.e. each person should have his/her independent notions and dogmas and his/her opinion should not be significantly influenced by others.

2. Independence, i.e. a persons actions should not be guided merely by what others do, but should be a well-informed choice.

4. Aggregation: As mentioned earlier, the collective intelligence of the people will only work if there is a proper mechanism for aggregation of the data.

Such experiments have been carried out in the West with successful results. Intrade.com (based out of the Republic of Ireland and thus governed by Irish laws) is an example of a site where consumers are able to trade contracts of future events for real cash and are rewarded in cash according forces of demand and supply. Intrade was by analysing the data, able to correctly predict Americas 2003 invasion of Iraq.

There have been no such specific experiments carried out in India, but such a novel method is worth exploring. Academic research institutes like the Iowa Stock Exchange in the USA have been able to predict election results better than exit polls (since the offer real-incentives to customers and the clients lose their money if they make a wrong prediction, i.e. there is real money at stake). Other events like wars, coups etc. have also been correctly predicted.

So, perhaps, opening up of betting markets in India and appropriately aggregating the data may actually give a clear picture as to where our country is heading (in terms of politics, sports, war and stability etc.). Maybe, then it would mean the end of surveys and exit polls- as data of people wagering real money is certainly more valuable.

Can tribes in India go the American way?