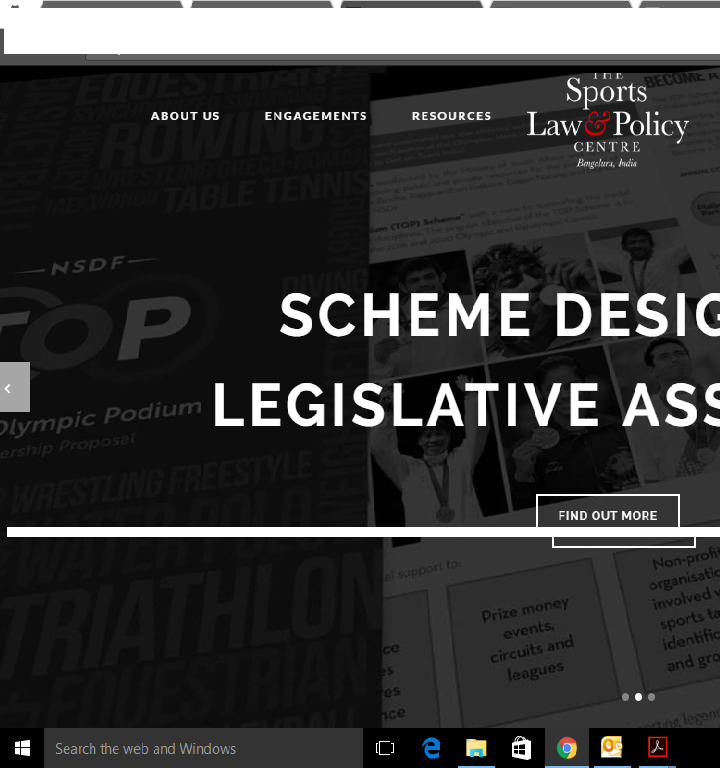 The Sports Law & Policy Centre, a Bengaluru-based independent think-tank (formed by the Go Sports foundation and law firm LawNK) has published a white paper titled ‘Games of Skill in India: A Proposal for Reform’.

The white paper prepared by sports lawyers Abhinav Shrivastava, Shan Kohli, R. Seshank Shekar and Anirban Saikia complete with an indicative map on states where games of skill are permitted and a table of state gambling legislations, provides a detailed and comprehensive information on the legality of games of skill, case laws on rummy and poker and the Nagaland Online Games of Skill legislation.

The paper goes on to point out the fallacy of the Supreme Court judgment in State of Andhra Pradesh v. K. Satyanarayana where the apex court ruled that rummy being a game of skill can be played, but if the organiser is making a profit from the game (over and above reasonable administrative fees for running the club), then it is likely to be classified as gambling and fall within the penal provisions.

The paper also delves on the recent regulations issued by the Malta Gaming Authority and the criterion set by the Maltese government for recognising games of skill.

The paper goes on to make three major suggestions for improving the business scenario for the games of skill industry: the first is to evolve guidelines for classifying games of skill, the second is to provide for an administrative mechanism for advanced rulings and the third is providing for central legislation and guidelines on the issue of regulation of games of skill.

While the research report is a great effort in providing a one-stop understanding of the legal issues relating to the games of skill industry, there are a few points which either may not have been covered in the paper or may not be practical:

The white paper may also have missed mentioning the litigation that ensued in the Supreme Court (that was subequently withdrawn) relating to the legality of rummy and online rummy for stakes as well as similar litigation in the Delhi High Court on the legality of online poker.

2. Kerala notification on games of skill: The white paper in its detailed analysis seems to have missed noting that apart from the state of Nagaland, even the state of Kerala has published a notification way back in 1976, mentioning a list of games of skill (which includes games such as rummy and dart) and detailing how they can be played subject to the condition that side-betting (that is, speculation on the outcome by non-interested third parties) should not be permitted on such games.

The notification has been issued by under Section 14A of the Kerala Gaming Act, 1960 which empowers the government to notify a list of games where skill predominates chance alongwith the restrictions or regulations under which such games can be played.

3.  Central legislation or advanced ruling mechanism may not be practical: The paper in its recommendations notes that the central government ought to come up with either a legislation or a set of guidelines on classification and regulation of games of skill. The paper goes on to note that entry 34 of the state list only deals with ‘gambling and betting’ and not games of skill. Consequently, the paper notes that the central government may have the power to regulate games of skill under its resudiary powers.

Unfortunately that may not be a correct position of law. Even assuming that games of skill do not fall within the entry ‘gambling and betting’, it would certainly fall within another entry of the state list (entry 33), which inter alia deals with sports, entertainments and amusements. In other words, the power to regulate and license skill games in any eventuality would vest with state governments and legislatures.

Thus, given the complexity of centre-state relations and quasi-federal nature of India’s polity, it would be very difficult for the central government to issue regulations on a matter clearly vested with the state.

Similarly, the creation of a separate advanced ruling authority to provide opinions on which games involve skill may not be practically possible. A better approach possibly would be to leave it to individual state governments to formulate laws wherein they could by way of a circular or executive notification classify and regulate games of skill, similar to the manner in which the Kerala Gaming Act has allowed the government to notify games which involve skill.

Note: The full copy of the white paper can be accessed here.